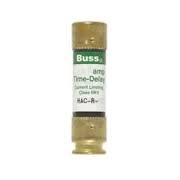 A time delay fuse is also sometimes known as a slow blow fuse. The purpose of this type of fuse is to allow a surge in electricity for a short time before the fuse actually blows. To many people, this sounds like a bad idea. However, its beneficial and actually much safer for certain types of electrical appliances.

If more power is being drawn than there should be, the fuse blows. Traditional fuses use a mechanism similar to a light bulb. A thin wire is used in the fuse, which is the right size for the amount of current being drawn. If any more is drawn then the fuse will burn out and blow, resulting in a dead circuit.

In a time delay fuse, part of the fuse works like a normal fuse that has the burnout link, but in addition to this, there is a short connector that has a spring attached to it. This spring is soldered onto the fuse wire. This can cope with an overload of 100 or even 200% of the normal load without causing any harm to the elements.

**ALL INTERNET ORDERS PLEASE READ FIRST** **PLEASE REMEMBER THAT SHIPPING TIMES YOU ARE QUOTED AT CHECK OUT ARE TRANSIT TIMES ONLY (how long it should take to get to you once the carrier has picked up your package), THIS DOES NOT INCLUDE PROCESSING AND PACKAGING TIME**. We are still here to serve our customers while following the mandated guidelines to keep everyone safe. We are working diligently to keep processing and packaging times to a minimum as always. Some factors beyond our control, however, have caused processing and packaging times to run well over our normal estimates. WE ARE CURRENTLY RUNNING APPROXIMATELY 3 WEEKS OUT FOR PROCESSING AND PACKING. As always we thank you for your business and your patience. Dismiss

Thank you for visiting American Supply!

Unfortunately, the site is down while we catch up with all the orders we have. We are so thankful for all of our amazing customers and appreciate your support during this time. We are working to be back online as soon as possible, if you would like to be notified by email when we open the website back up please enter your email below and we will email you A.S.A.